Hey friends! I can hardly believe it but it’s been a year since we bought this little gem. I’ll never forget walking in and seeing the stained carpet and purple walls. It was in rough shape but I had my fingers crossed that it was bad enough that others wouldn’t want it and it would be all ours. Our realtor probably thought we were crazy, and I’m not totally convinced we weren’t (did I mention I was about 8 months pregnant when we first saw the house?) but we put in an offer and 30ish days later the house was ours. 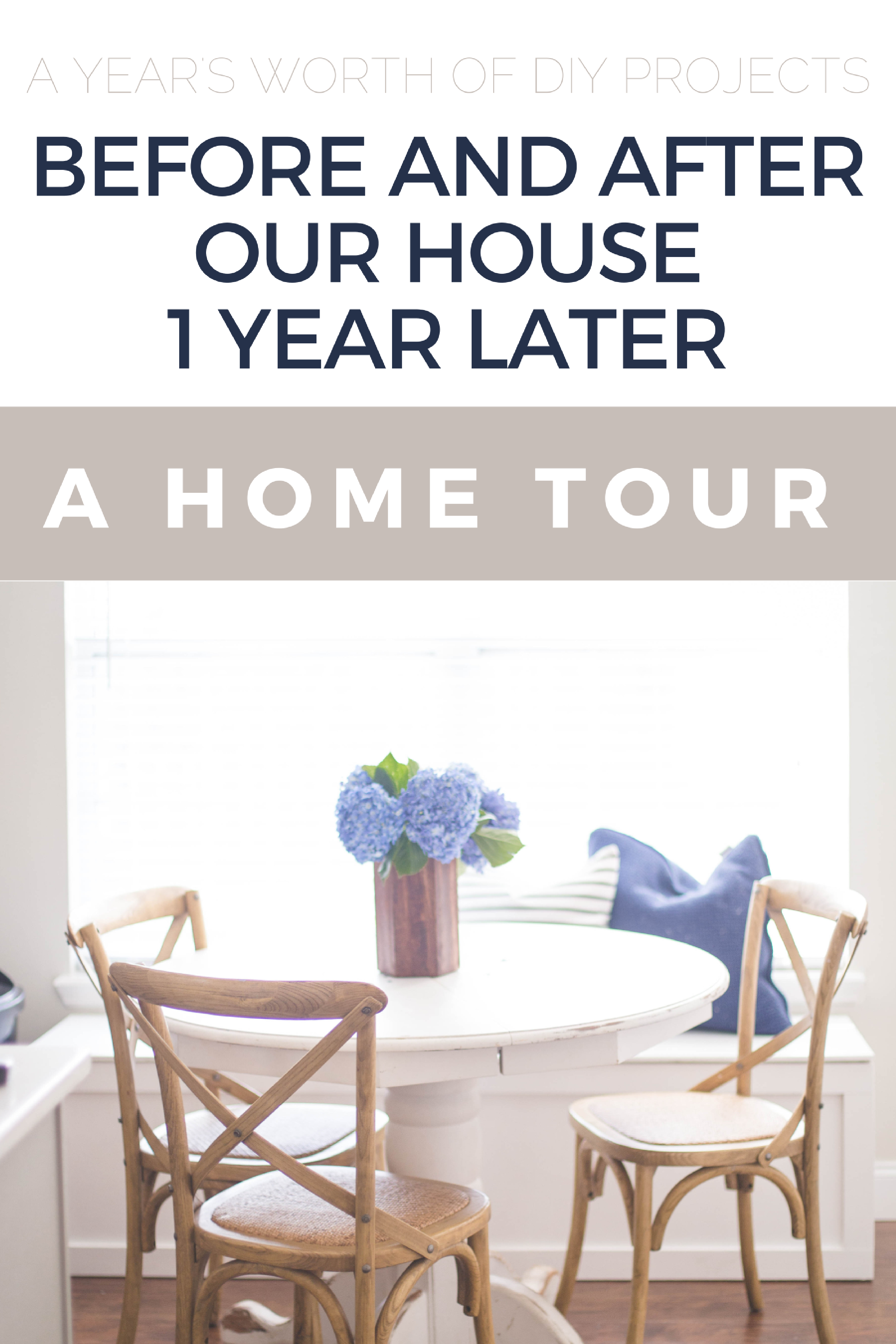 As soon as we got the keys we started ripping out the old carpet. Bless Matt because he had the unfortunate job of pulling it all up. Since the house had been vacant for years before we purchased it, not only was the carpet soiled from previous owners, but we even found the remains of a nest of baby snakes right underneath the carpet near the sliding glass door. Can you even? As you can imagine, the baseboard were in equally bad condition so we decided to replace those as well. After the carpet and baseboards were out we began the enormous task of painting the entire house. I don’t know how we did it but we painted every wall and door in the house in just about 10 days. Just Matt and I. We took turns switching off painting and playing with Peighton. Millie at just a few days old would nap her in pack and play while we worked on the house. It was equal parts chaos and joy.

Today, I thought it would be fun to take you through our house and show you a little before and after just one year after purchase!

I feel like I should provide a disclaimer here: yes, I know this is a lot of makeovers in a short amount of time. We sort of have a time clock running since we know we are only here for a short amount of time (1.5 more years), so eventually this house will become a rental or be sold and we want the house to be ready for that when the time comes.

1 Year Before and After – Home Tour 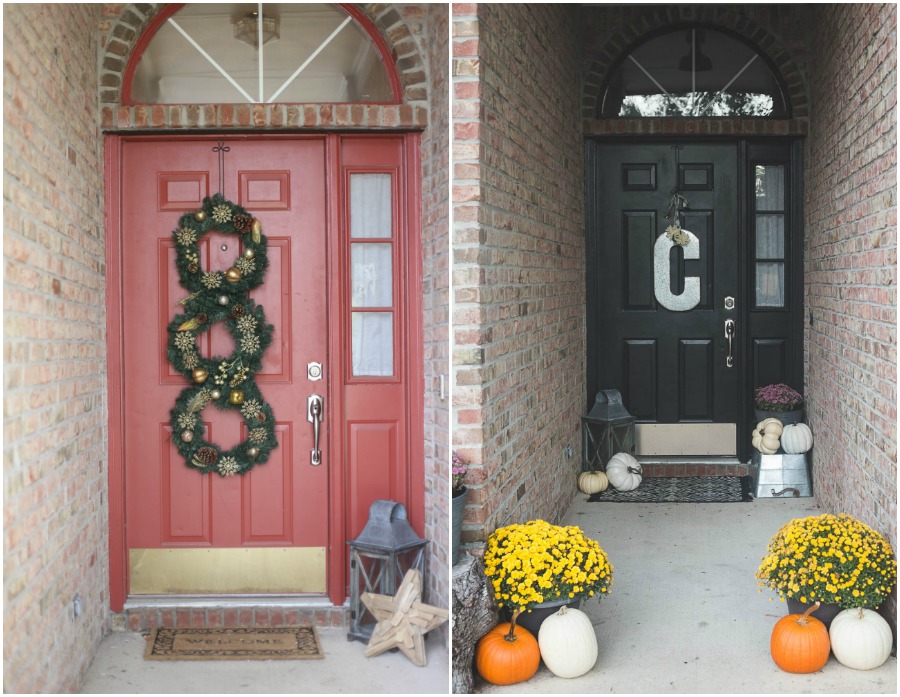 The previous owners painted the front door a rusty color of red. I thought it looked bland against the red brick so I painted the door black. I also changed out the kick plate to match the brushed nickel door handle. 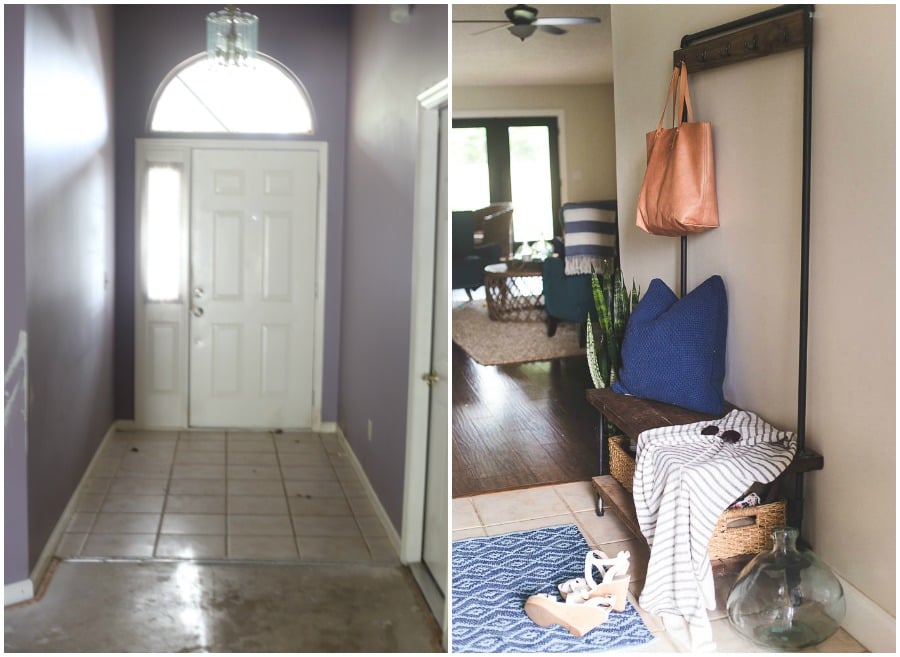 The entryway was purple. We opted to keep the tile since it rains a lot here and worrying about the laminate flooring in the entryway would have been too much anxiety for me. Just The grout was so filthy I didn’t even know it was white. I recently had it professionally cleaned and I was literally shocked! Everything here got a fresh coat of paint as you can see, and we also switched out that 90s light fixture (which you can’t see in this photo). I also put our DIY entryway organizer here and it’s the perfect drop zone as we come through the door. 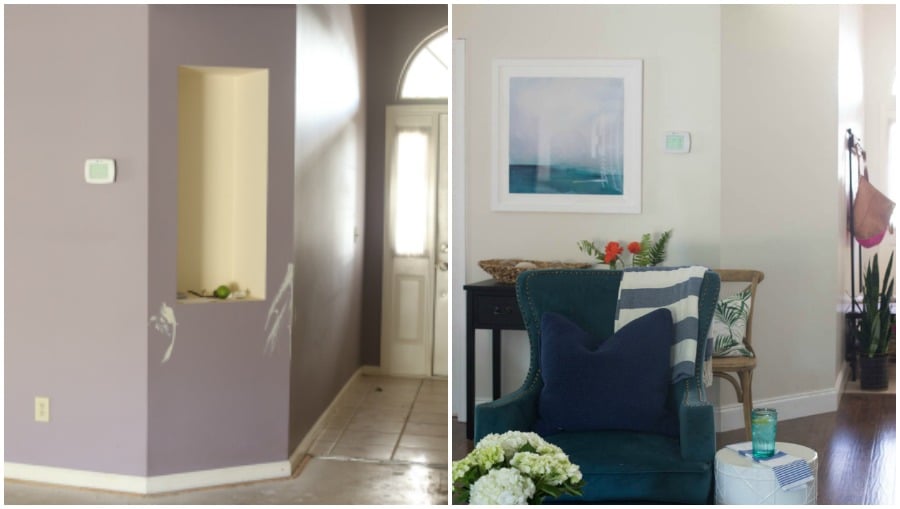 One thing that really dated the house was the presence of this little niche (there was another over the fireplace). We filled them in and I think it’s a much cleaner look. I have to admit while it was there it served as a catchall for us. That’s another reason why I’m glad it’s gone – I’m sure it would have become a clutter hotspot in no time. 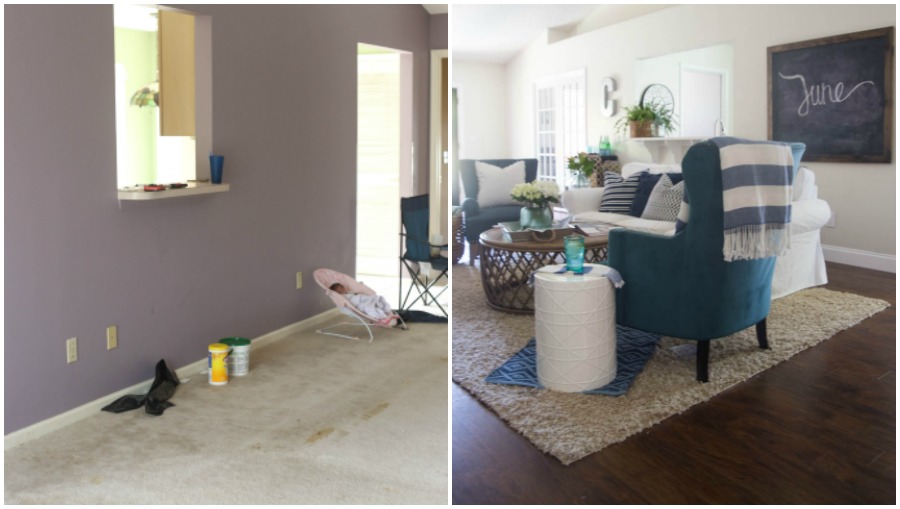 Here’s another view into our living room from the entryway. One major change besides the obvious carpet removal and paint was the expansion of the opening from the kitchen into the living room. We doubled the opening with the hope of creating a breakfast bar but after living with it, it’s really not practical. The space around the bar is tight. In fact, I ended up moving my sofa against the wall for more space between the sofa and the TV. In hindsight, instead of creating a breakfast bar, I wish we would have just framed out the opening. We could have saved lots of money in quartz! 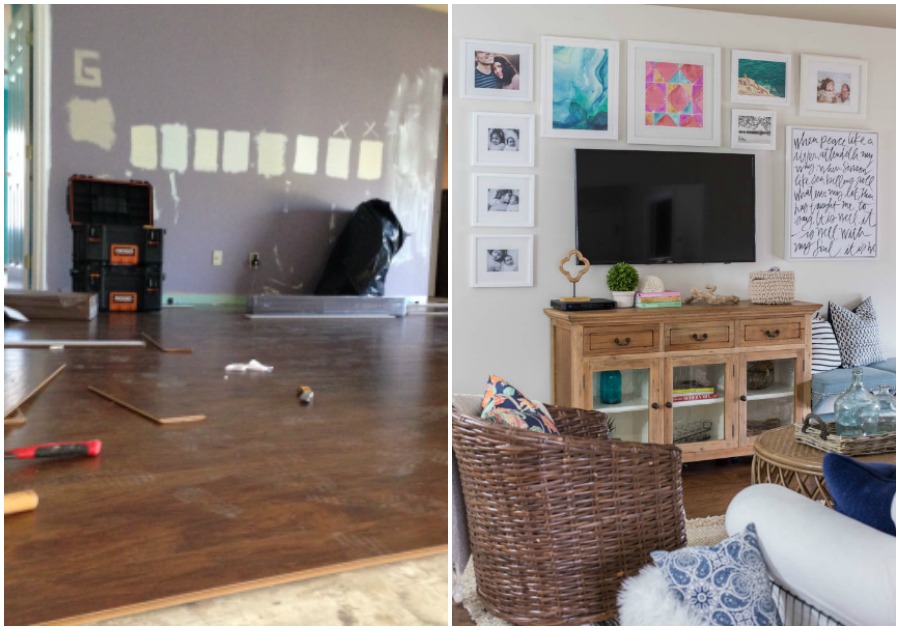 Our house has a very open floor plan with essentially the entry/living room/kitchen area is almost one huge space. It made sense to paint the entire area one color and I wanted it to be a neutral. I tried out many versions of white-ish neutrals before deciding on a color. After living with the selected paint color for a year now, I wish I would have chosen something different. I wish I would have had more time before I made the decision to paint the entire house this paint color. While it’s a beautiful color, in our home, it comes off very yellow at times and I don’t love that. Will we be repainting anytime soon? No. While I would love to, repainting the majority of our house is just more of a task than I’m willing to take on. 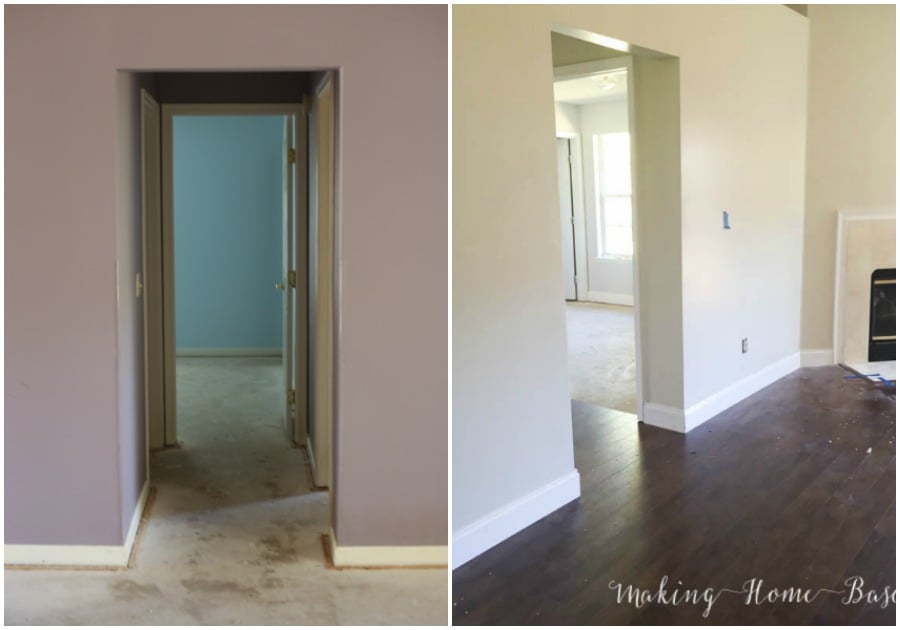 This little hallway leads into the girls’ rooms and the bathroom. The after photo is more of an in progress pic because it was taken just after we finished the laminate flooring and all of the painting! What a difference! 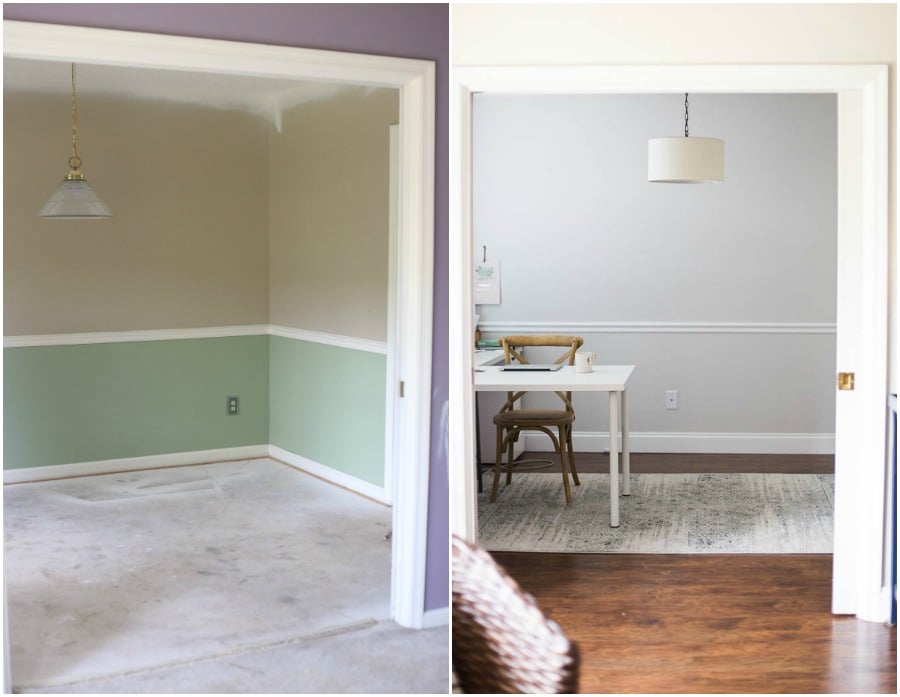 I love this space so much. It’s tucked away on the far side of the living room behind a pair of pocket french doors but it also has an entry from the galley kitchen. It would be a beautiful dining room (although small) but it made more sense for us to use it as my office. I can peer into the living room and watch the girls while also checking my email or working on little tasks. This is one room that we actually didn’t paint right away. We weren’t sure what we would do with the space and originally, I had my office in what is now Millie’s room. This space still has a long way to go but fresh paint, a new light, and a pretty rug definitely make it presentable.

Our kitchen was a major priority when we bought the house. I wanted a gray and white kitchen because I love the clean look. So, we carried the laminate in here, removing the dirty tile. Then we painted the cabinets gray, replaced the countertops with quartz, replaced the sink with this huge amazing single bowl stainless sink, replaced all of the appliances, and added a backsplash. 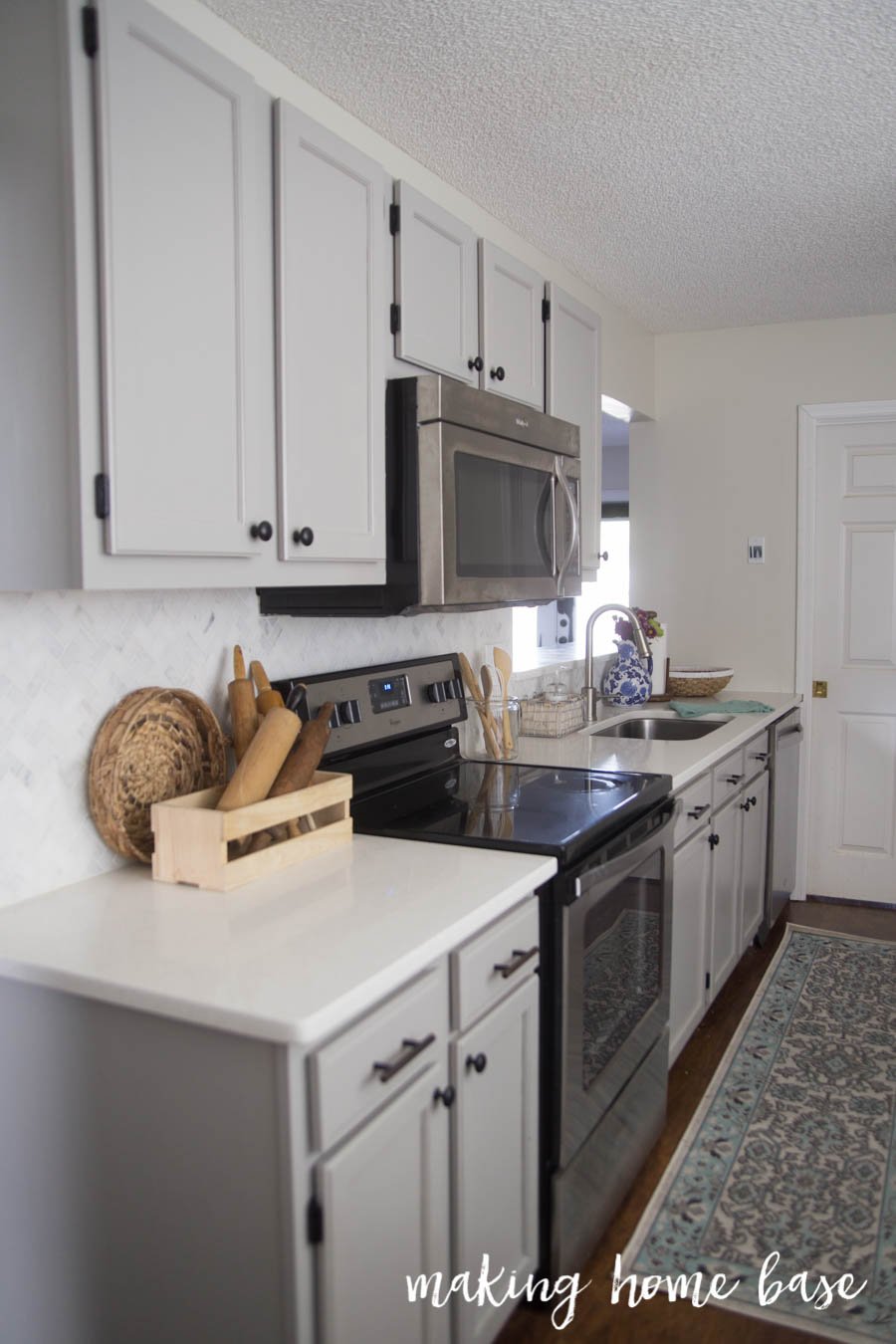 If this were our forever house I would have considered opening the entire kitchen up into the living room. The galley style isn’t my favorite, and I wish there was more natural light but working with what we had, I love the results. 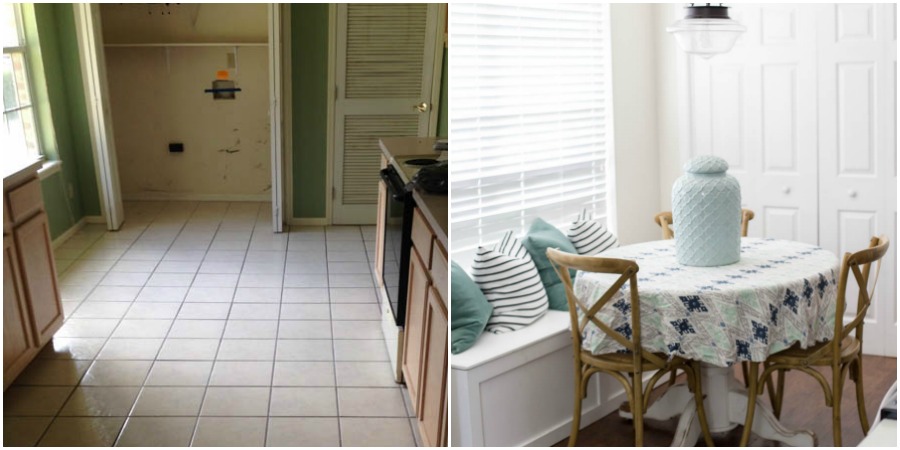 This area is probably the one that gets the most traffic in our house. We eat all of our meals around this table together. Peighton sits and colors, does play doh, plays with ponies, all right here. Usually our table is covered in some sort of toy creation. I love that we built this storage bench to go beneath the window. It stores all of the small appliances because our kitchen lacks storage space. We have a small pantry and that’s it. You can also see the before and after of the laundry closet here. 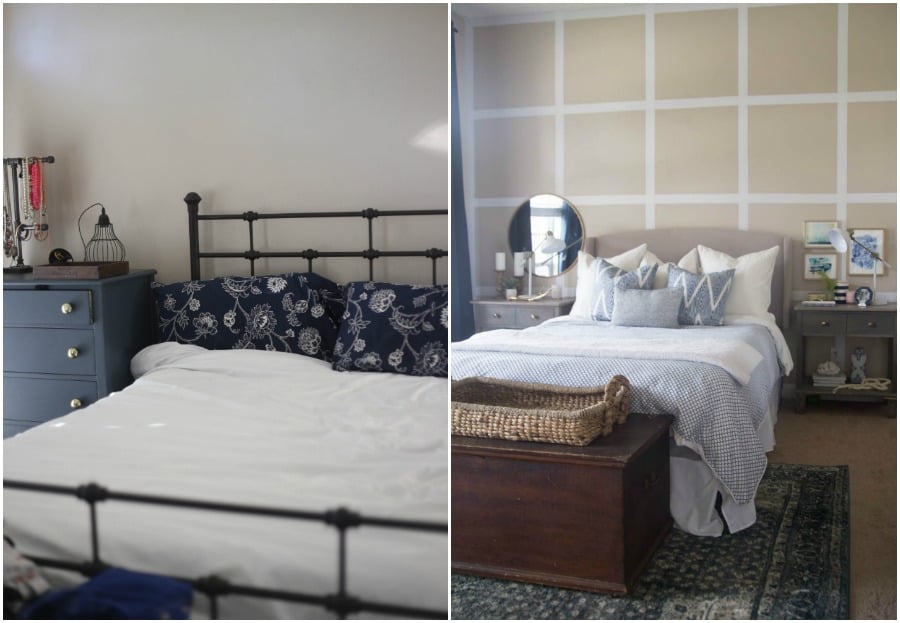 I regret not taking a good before shot of this space. The walls were crimson red and gold (I may have a photo or two of the wall color in the original before post). We painted the whole room a shade of griege and moved in our furniture. I knew I wanted to create a soft, calm spot for us to enjoy, I created this moodboard and over a course of a few weeks, we ordered a new headboard and rug, built nightstands, added the feature wall and now we can’t love this space enough. 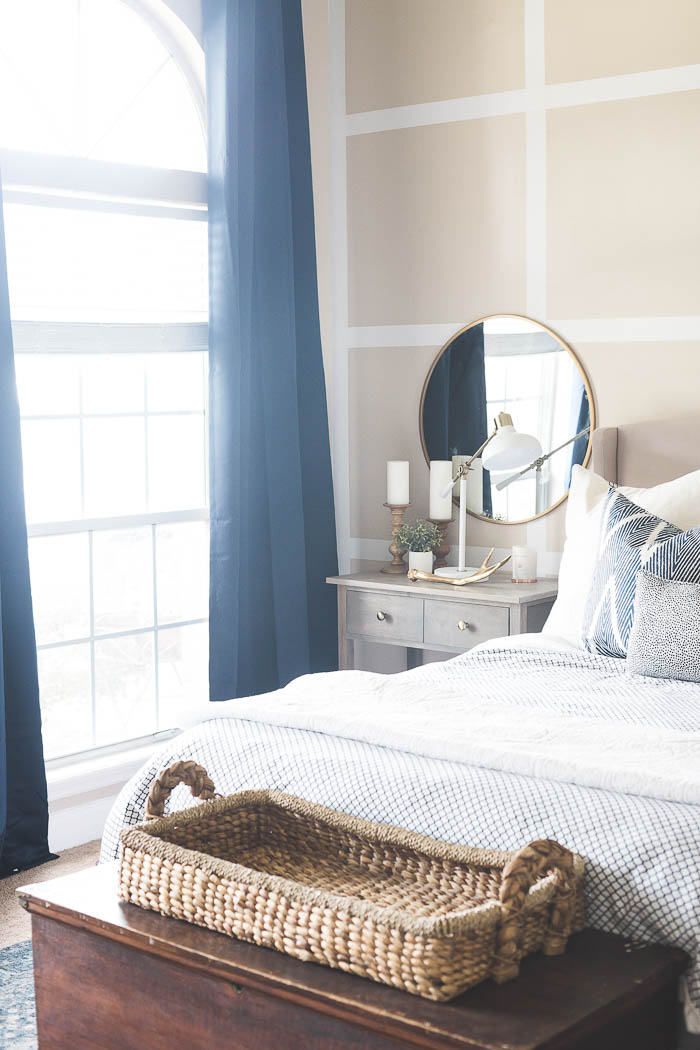 We have huge windows that let in tons of natural light. At the same time, it makes the space pretty warm in the middle of the day. We had a huge maple in the front of the house that did a great job providing shade but we lost it in the hurricane earlier this month. These black out draperies make a world of difference! 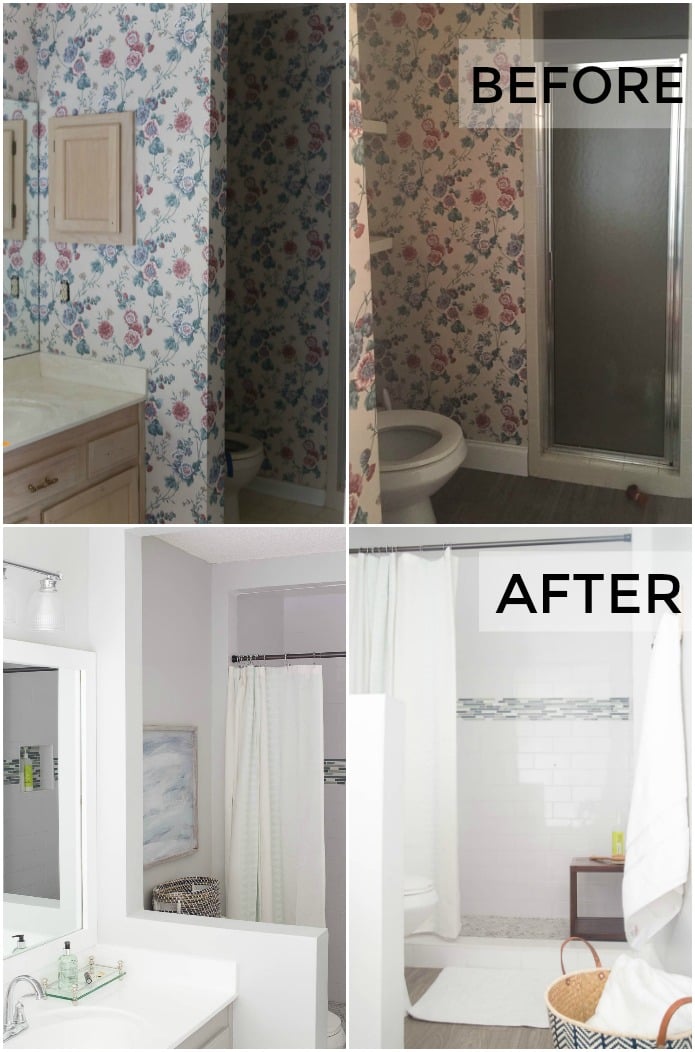 So, this space was the dooziest (not a word but should be). When we had our laminate floors done throughout the house, we also had vinyl plank flooring installed in both bathrooms. It was nice to get all of the flooring done at once. Later, we tackled the rest of the space. The flower wallpaper really flew us through a loop because it couldn’t just be torn off. It was sealed directly to the drywall paper so as we started tearing it off, it was also tearing off the drywall paper. We had to stop and call in a professional. Our bathroom is very awkward in size. It’s sort of shaped like an L with split vanities and then a long narrow lead up to the shower. Before, our shower was very closed off and felt small. I knew if we removed the shower enclosure it would feel bigger and it did. When we tiled the shower, I wanted to take down the wall that split the toilet area from the vanity because it hid the view of the pretty shower tile. We cut out half of it and it worked like a charm! 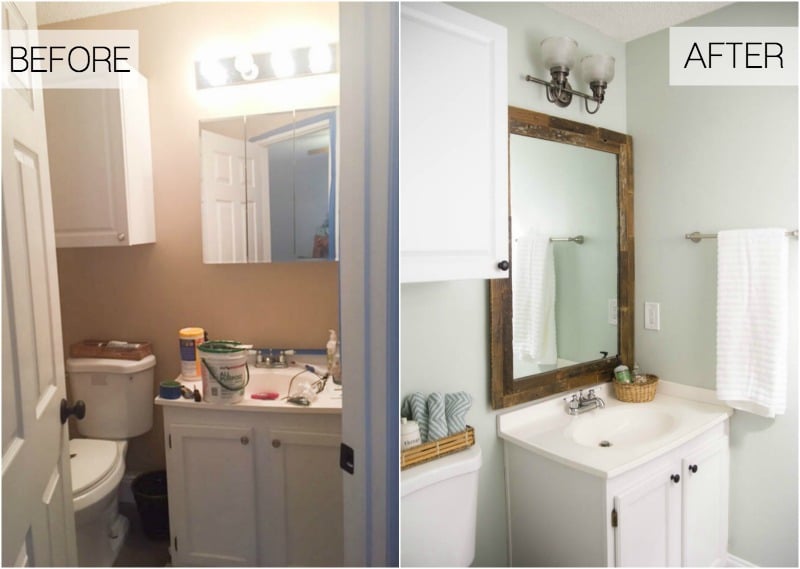 The guest bath really wasn’t in bad shape. Most of the work was simple to do. The same vinyl planked flooring went in here then, we of course painted the whole space. One of my favorite things that we did was change out the mirror and lighting. The mirror was an antique store find that we had sitting in our garage and it worked perfect in this space. 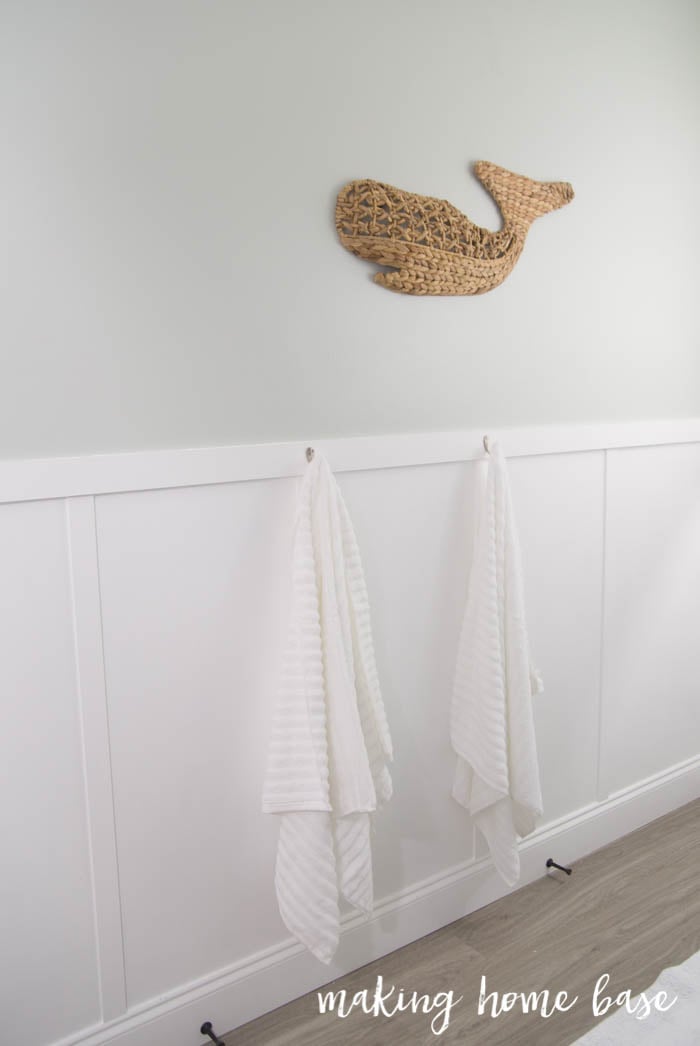 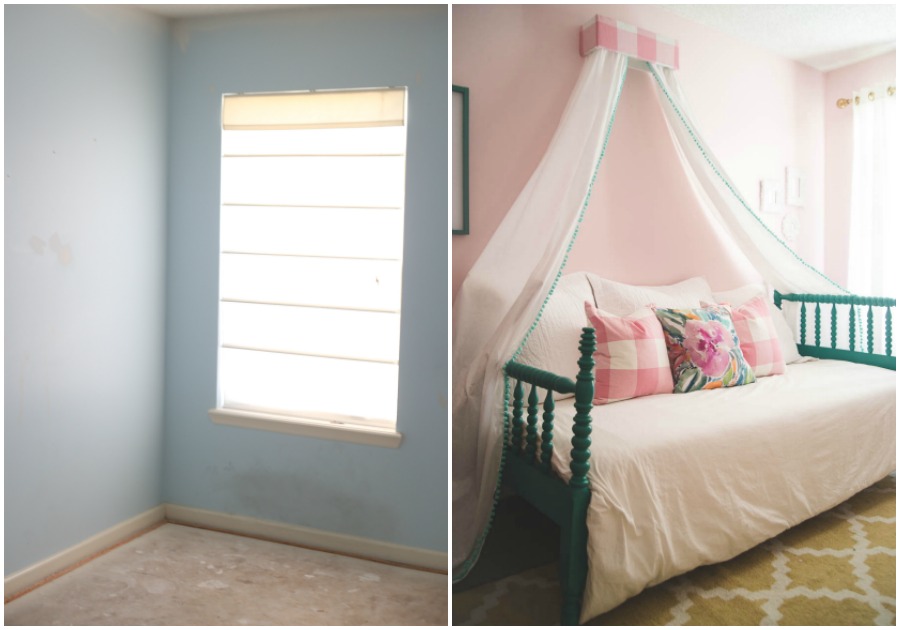 Peighton’s room was the only room that didn’t get a neutral paint color. She was adamant about having a pink room and who can blame her? So together, we picked a pretty shade of pink and moved in all of her stuff. Just a few months ago we gave her room a little makeover by bringing in this antique spindle bed that we painted a beautiful shade of emerald green. We also added this fun canopy and new throw pillows. We hang out in here a lot!

Our backyard is one of the main reasons we bought this house. It’s large and totally fenced in. The only downside is that it didn’t have any covered seating. Earlier this year, I teamed up with The Home Depot for The Patio Style Challenge and we made over our patio. Now it’s our favorite place to be. 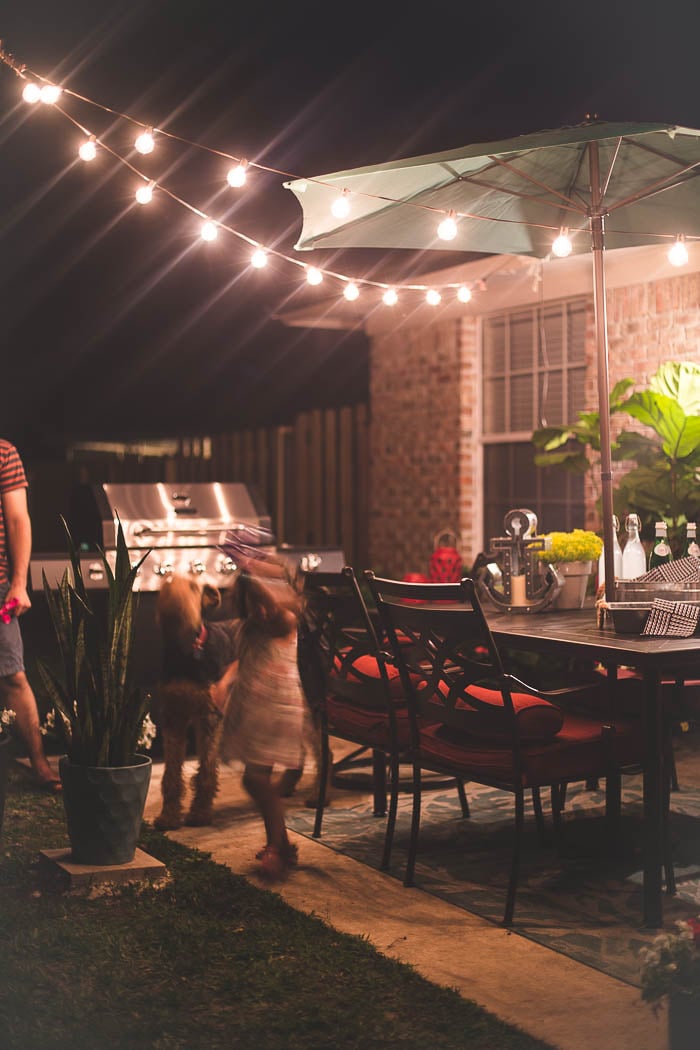 Ha! Don’t you love the blur that is my child and my dog. That is pretty typical around here, especially on s’mores nights!

Phew! You made it through the entire 1 year after home tour! Not bad, for just a year’s worth of work, huh?

Have a great day! xo 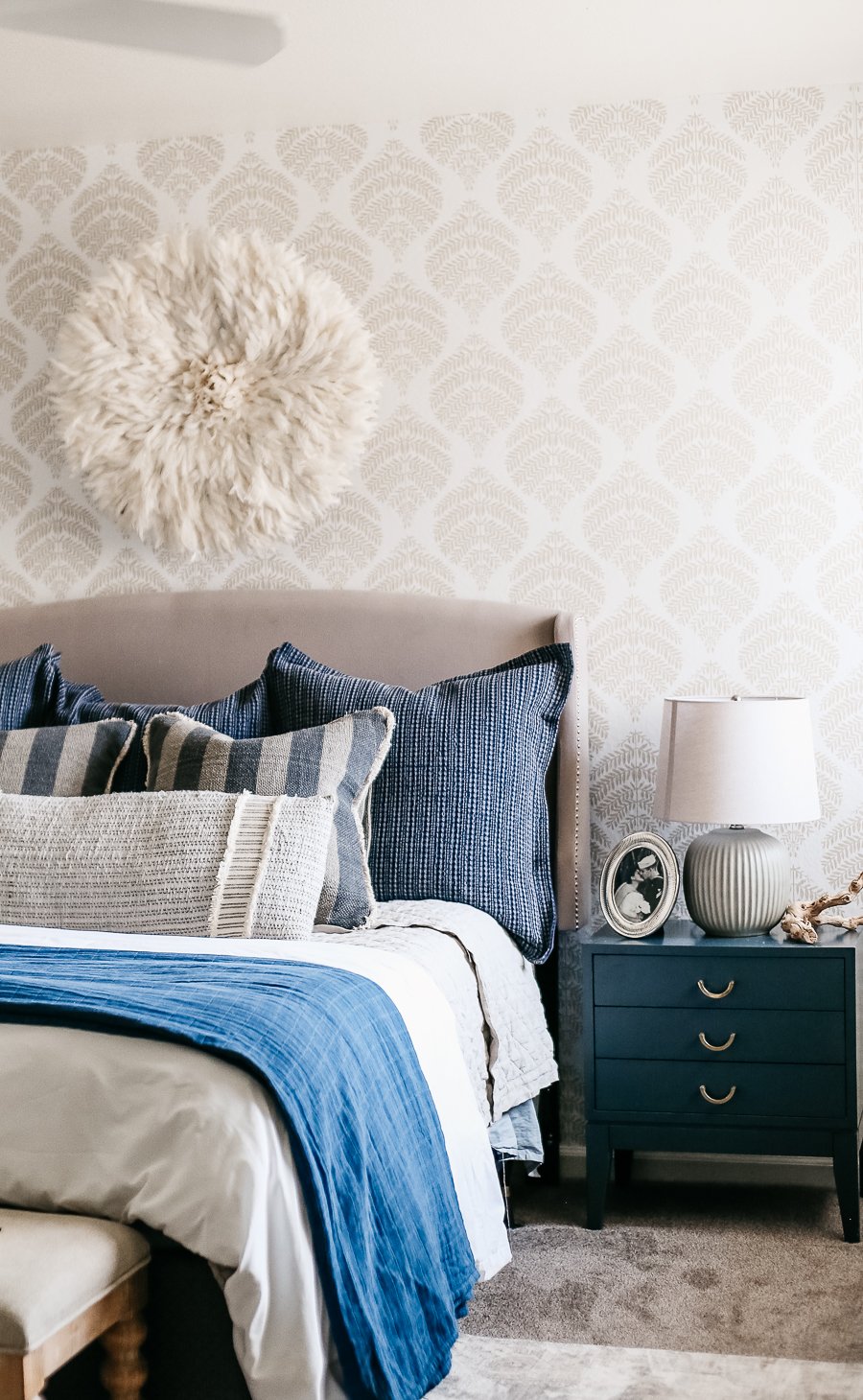 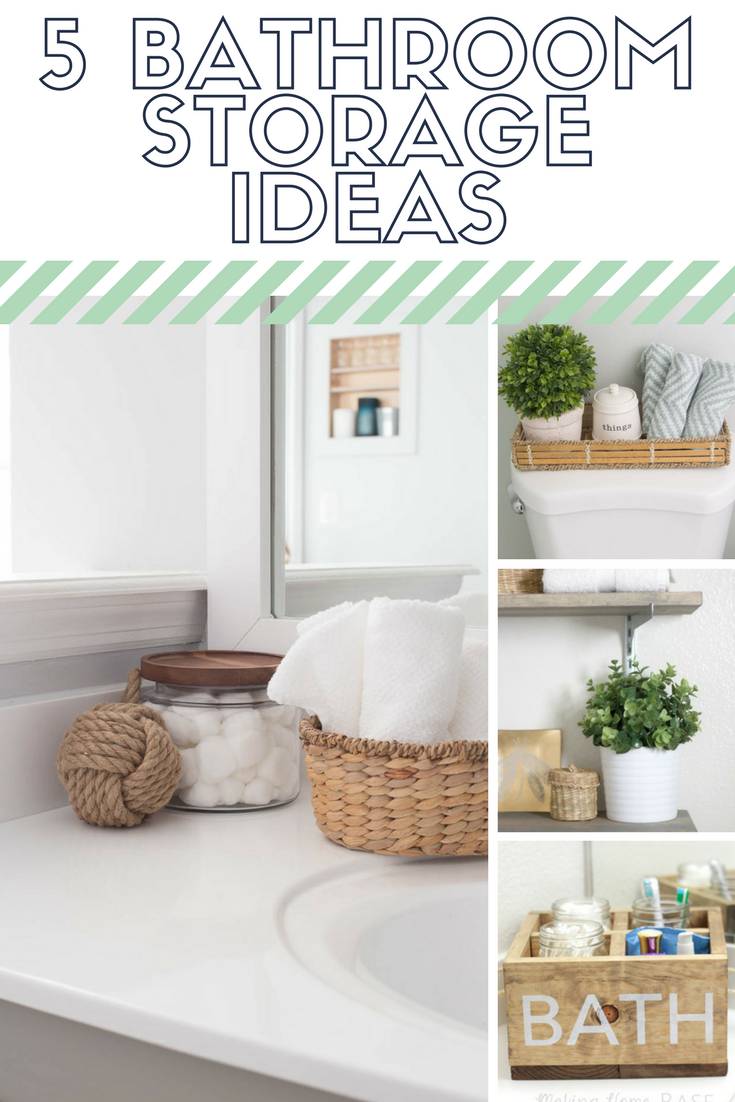 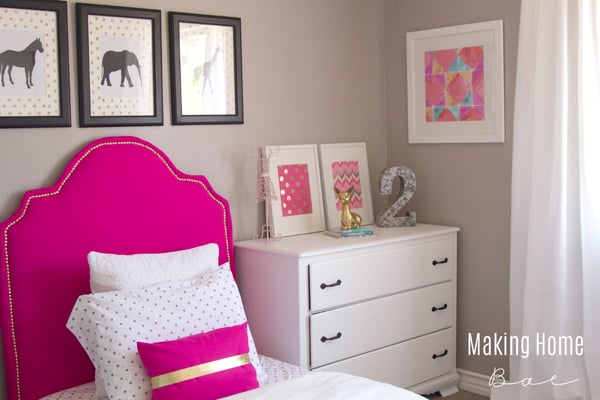 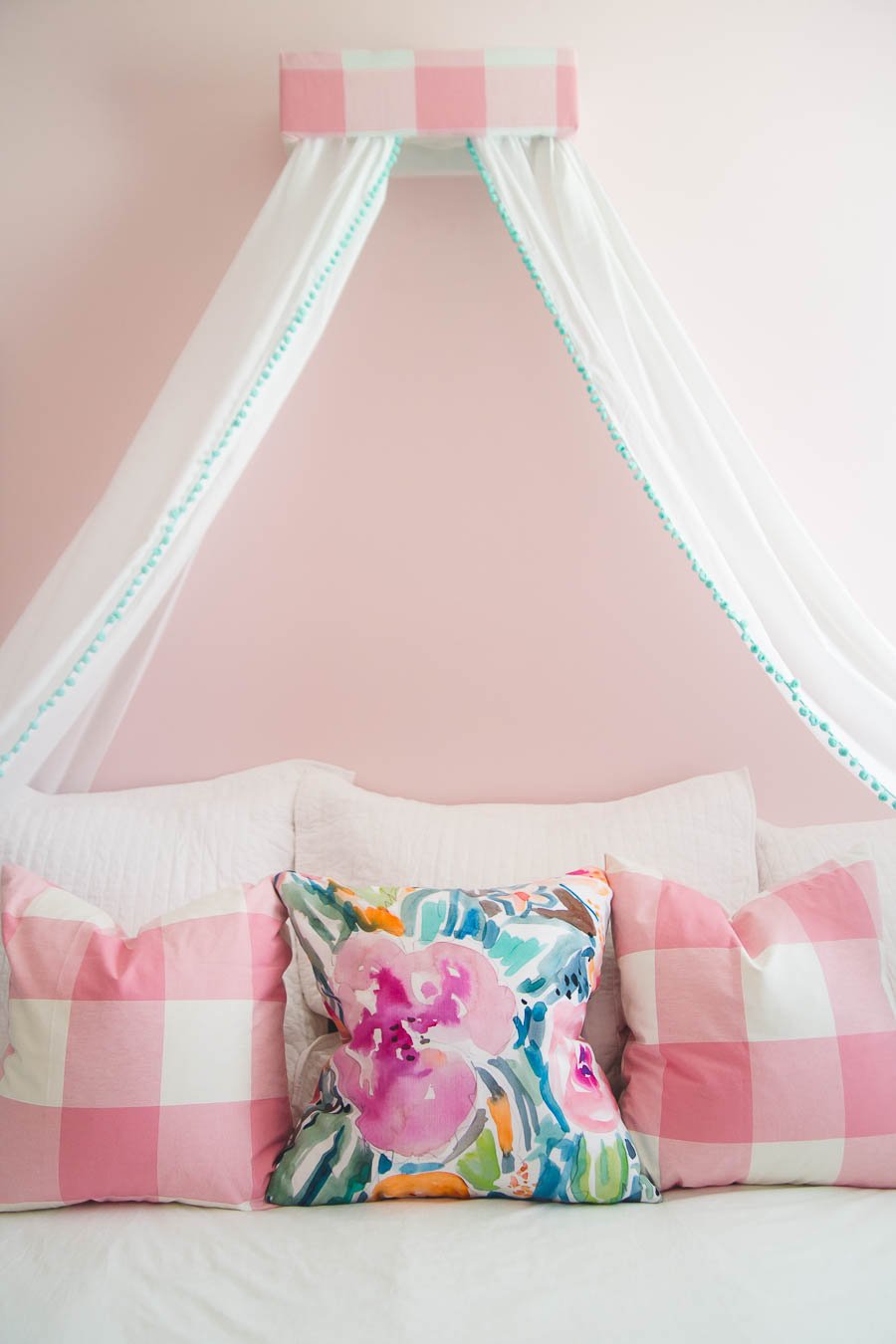 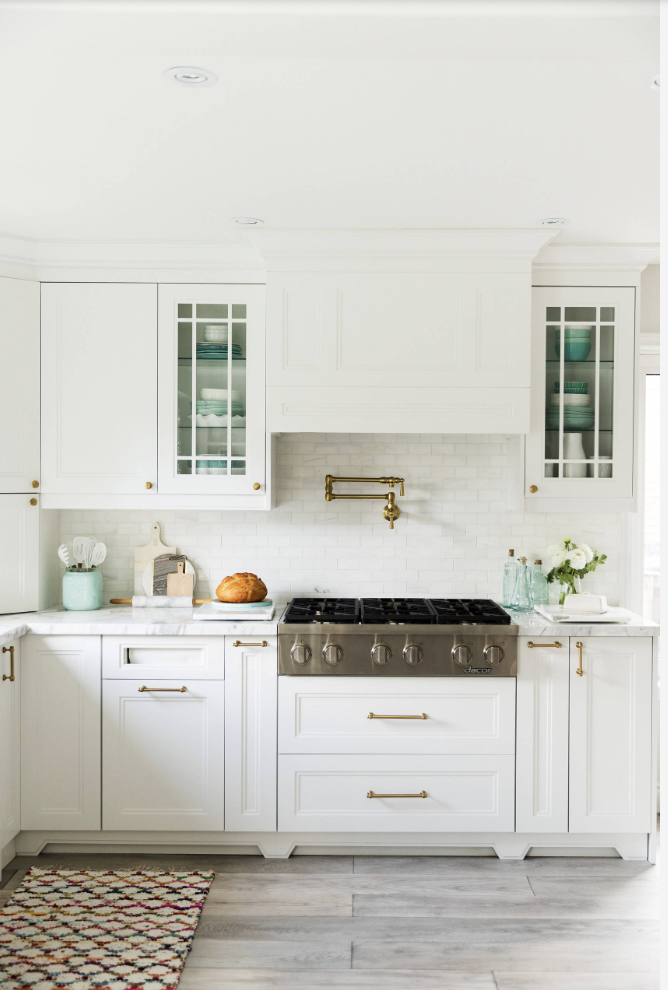